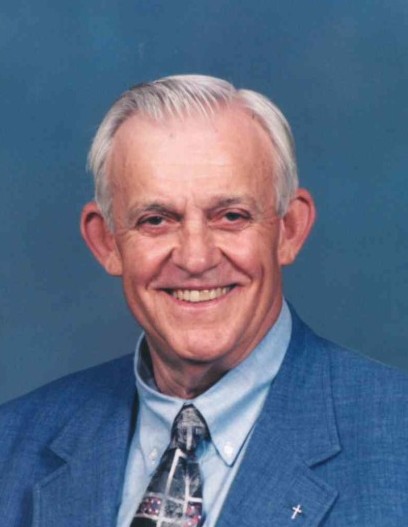 Dick was born on June 15, 1932 in Marion County Kansas on the farm South of Lincolnville where his parents, Herbert Leslie and Clara Etta (Hammer) Bredemeier lived and passed away at St. Luke Living Center on June 21, 2019 just a few days after his 87th birthday.  Dick attended several rural schools in Marion County before attending Florence High School for two years, and his final two years at Marion High School. Before school age, Dick was given a pony by his father. Dick loved horses and on Sundays would ride his horse everywhere to visit with friends and relatives, sometimes riding at least 10 miles!

After high school, Dick worked at a rock quarry outside of Marion and farmed with his parents. Dick and Evelyn Richmond were married on March 15, 1952. After marriage, Dick managed the Phillips 66 station in Marion until 1967 when he took over management of the Phillips 66 station in Florence, Kansas for three years. Dick and Evelyn then owned the Gambles store in Marion from 1970-1972. From then on until his retirement in 2000, Dick became a “Tool Maker”, working for the Hesston Corporation until 1974 and finishing out his career at Marion Die & Fixture.

Dick and Evelyn loved to camp and were members of the “Marionettes”, camping at various lakes in the region at least once a month. For at least 10 summers, Dick and Evelyn joined their good friends Norman and Rosella Plenert at a campground in south central Colorado. Dick loved trout fishing in the streams of Colorado and also at Rolling River in Missouri.

Dick was an avid sports fan, attending High School football games, American Legion and Babe Ruth games and also officiating for the Ark Valley League football games. Occasionally he would volunteer to officiate for the Junior High football games in Marion. Other hobbies included bowling (a record 288 game high at the Marion bowling alley), singing, dancing, water skiing, trap shooting with the Marion Gun Club and watching old black and white Western movies. Dick always had a big garden until late in life when his Parkinson’s made it too difficult. At this point, his family stepped in and planted a “downsized” garden for him. Dick’s favorite tools were his pocket knife and his True Temper shovel which for many years was used to “plow” his garden.

Dick is survived by his wife Evelyn, sons Don (Donna), Jim, and Michael (Lynne), five grandchildren and 5 great-grandchildren, and sister Laura Bredemeier of Patalona, California. He was preceded in death by his parents and infant son John Wayne Bredemeier.

A memorial service will be held at a later date.

To order memorial trees or send flowers to the family in memory of Richard (Dick) H. Bredemeier, please visit our flower store.