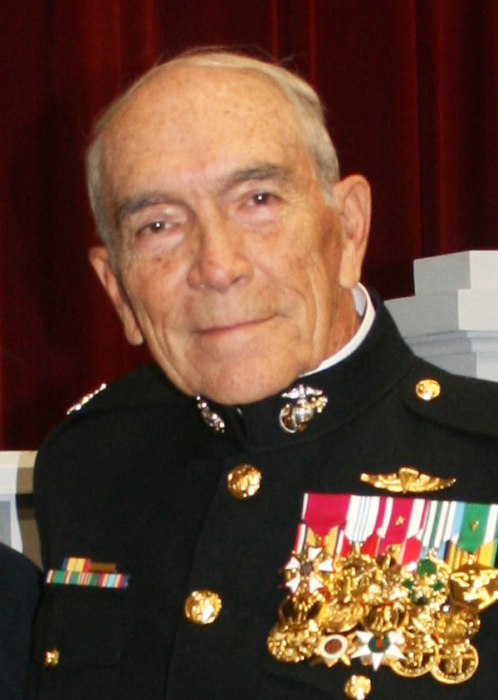 Dick's life began on October 1, 1935, in Leavenworth, KS.  He was the son of Joseph and Erma P. (Hawes) Schwartz.  Dick was a 1953 graduate of Leavenworth High School, where he excelled in athletics.  He went onto Ottawa University where he earned his Bachelor of Science degree and earned athletic letters in football, basketball, and track, and was inducted into the Ottawa Hall of Fame.  Dick completed his formal education by earning his Masters in Business degree from the University of Southern California. He was united in marriage to Margie Bernhardt on August 9, 1959, in Marion.  Dick began his military career in 1954 by serving in the United States Coast Guard and served his country later in the United States Marine Corps until his retirement as a Colonel in 1989. While in the Marine Corps, Dick served in Vietnam as an infantry company commander and earned several commendations.  He represented the Marine Corps in the All Service and national AAU track meets where he set a Marine Corps record personal best discus throw breaking the record of Olympian Bob Mathias. He later used those skills to coach the Marion High School discus throwers and sent two athletes to the state competition.  After retirement, Dick moved to Florida working with veterans effected by the Dow Chemical Co. "Agent Orange".  He was a humanitarian at heart, whether it was making sure those less fortunate had food on a holiday or giving away clothing to strangers, Dick was always thinking of his fellow man.  He was responsible for a local food drive during the Vietnam War asking for commodities from the community to feed to the children in Vietnam that he encountered.  Dick was a member of the American Legion, Veteran's of Foreign Wars, the Kiwanis, and Eastmoor United Methodist Church. He loved to golf, travel, and enjoyed driving his 1966 Mustang.  His greatest joy was his family which includes his wife Margie Schwartz of Marion; children Thane (Judy) Schwartz of Marion, and Peri (Ray) Griffith of Chesapeake, VA.; grandchildren Landon (Stephanie) Schwartz, Bronson Schwartz, Richard (Kylie) Griffith, Ben (Ashley) Griffith and Daniel Griffith; and great-grandchildren Josslyn, Adeline, Easton,  Conley, and Ransom.  Dick passed away on April 20, 2021, at St. Luke's Living Center in Marion.  He is preceded in death by his parents, and 12 siblings.  His family will gather with friends on Friday, April 30th from 6-8 p.m. at Yazel-Megli Funeral Home, Marion.  A memorial service will be held in his honor on Saturday, May 1, 2021, at 11:00 am at Eastmoor United Methodist Church, Marion led by Pastor Darren Frazier and supported by the Marine Corps Reserve unit from Wichita.  Dick will be laid to rest in Arlington National Cemetery, Washington, D.C. with full military honors.  Memorial contributions in his name may be directed to the Marion Food Bank or Ronald McDonald Charities, both in care of the funeral home.  Please sign his online guestbook and leave a memory of Dick at www.ymzfh.com.

To order memorial trees or send flowers to the family in memory of Richard H Schwartz, please visit our flower store.