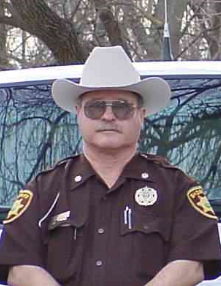 Robert and Brenda Richmond were married on December 23, 1972, in Marion, Kansas.  One son, Michel Wayne Soyez, was born to this union.

Robert attended Marion Schools, graduating with the class of 1965.  He proudly served his country in the US Navy from 1966 – 1970 during the Vietnam War.  After returning home, he worked for Kansas Department of Transportation and drove a semi truck for AMPI, Ludwig Trucking, and Phillips Industries.  Robert entered into his law enforcement career in July 1978.  He served the citizens of Marion County and the City of Marion for 24 years, retiring in Feb 2002 as Marion County Undersheriff.   After retirement, he continued to work as a part-time officer for the City of Marion from 2002 until 2012.

Robert was a member of the American Legion Post in Marion.  Robert was an avid collector of N-scale model trains, stamps, and coins.  He enjoyed watching NASCAR and Westerns, especially John Wayne movies.

Robert was preceded in death by his parents and sister, Phyllis Soyez.

To order memorial trees or send flowers to the family in memory of Robert "Bob" Soyez, please visit our flower store.