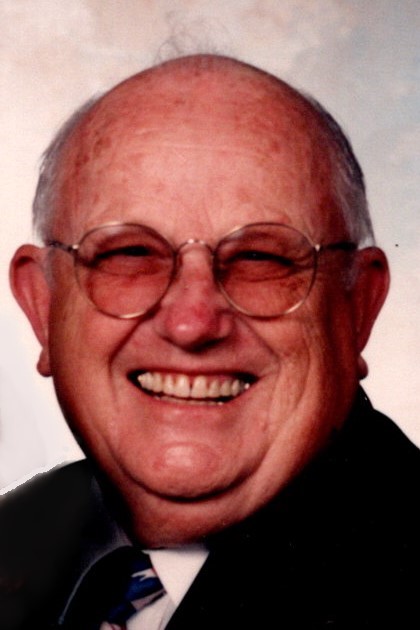 Bob's life began on November 5, 1926, in Eldorado, KS.  He was the son of Lawrence Ray and Mary Evangeline (Blankenship) Lamb.  Bob is a graduate of Leon High School and the St. Louis College of Mortuary Science.  After high school, Bob served his country in the United States Army during World War II.  He was united in marriage to the former Clial Mae Doornbos in El Dorado on April 11, 1948.  Bob and Mae were the longtime proprietors of the Lamb Funeral Home in Whitewater.  Prior to coming to Whitewater and purchasing the funeral home from the Smith family, Bob worked for Kirby Funeral Home in El Dorado.  Bob and Mae expanded the funeral home to include a new chapel. Through the years, the couple also operated a furniture store, a gift shop that included an old-fashioned soda fountain.   He was also employed by the U.S. Post Service in Whitewater for 20 years.  Bob was a long-time member of the Whitewater Federated Church, Gideon's International, the Whitewater Lion's Club, the American Legion for more than 70 years, the Masons, Eastern Star, and also served on the Remington School Board for many years.  Bob and Mae were instrumental with other community leaders in establishing the Wheat State Manor Nursing Home and engaged in countless community efforts to better Whitewater.  His loving family includes his children Robert (Judy) Lamb II of Halstead, Val (Denette) Lamb of Hutchison, and Beth (John) Reinhart of Olathe; ten grandchildren, eight great-grandchildren; sister Helen Kiser of Whitewater and brother Jack Lamb of Nickerson.  Bob passed away on Wednesday, April 28, 2021, at Wheat State Manor.  He is preceded in death by his parents, wife Mae, and brothers Don, Lee, and Lawrence.  Friends are invited to a visitation on Sunday from 2-5 p.m. and Monday from 9- 10 a.m. at the Lamb Funeral Home. Bob’s funeral service will be on Monday at 10 a.m. led by Pastor Jason Lowery of the Federated Church.  Bob will be laid to rest with military honors at Sunset Lawn Cemetery, El Dorado.  Memorial contributions in his name may be directed to Wheat State Manor in care of the funeral home.  Please sign his online guestbook and leave a memory of Bob at www.ymzfh.com.

To order memorial trees or send flowers to the family in memory of Robert Paul Lamb, please visit our flower store.