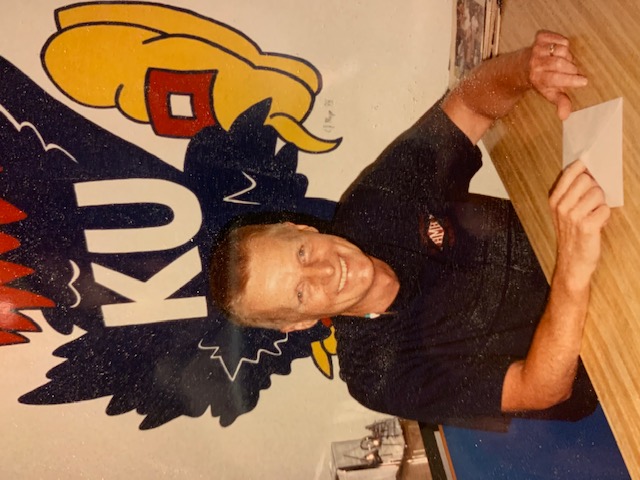 Roger Glenn Boelling completed his earthly journey on Saturday, June 5, 2021 at Herington Municipal Hospital. He had suffered from several illnesses since January 2021 and was finally overwhelmed by a month-long bout of aggressive cancer. He joins a heavenly band of KU fan family members who have gone before.

Roger was born in Abilene, Kansas but lived in Herington almost his entire life except for moves to Prairie Village, KS and Cedar Rapids, IA to follow his dad’s railroad career before returning to finish High School in Herington. He worked for a short time in Hutchinson after college, fortunately that was just long enough to meet his future wife. They met at a singles dance and, as Roger said: “I think she knew I was the one and she convinced me!” He married Helene Missildine July 20, 1968 in Hutchinson before moving back to Herington. They were married for 50 years until her death on September 30, 2018.

Flowers, music, reading, and walking were some of Roger’s hobbies.  His interest in music was first demonstrated at just six years old when the Feb 27, 1948 Council Grove Republican reported that the annual 4-H achievement banquet show “was stolen by tiny tap-dancing Barbara Granzow and Roger Boelling, who appeared in colorful costumes” before the 300 in attendance.  He regretted quitting his piano lessons after 5th grade, but music continued to be important in his life.  Roger served for four-years as drum major of the University of Kansas Marching Band under Band Director Russell Wiley from 1962 to 1965.  Therein began his lifelong support of University of Kansas athletics.  He was an avid reader his entire life and participated for many years with the Herington Book Club.

Life was relaxed while he was growing up with lots of time for playing and learning.  Holidays were important as were birthdays. He played with the neighborhood kids, rode bikes, played with his pets, and even made a scooter out of an orange crate and roller skate wheels. In High School, he tried to do well in the classroom, be involved in school activities and clubs. He served on Student Council, high school productions and was a basketball starter in High School.

While in high school, he worked as a soda-jerk in Gaylord “Red” Edwards’ Rexall pharmacy. There he became interested in pharmacy as a career. Fortunate for us, he graduated with a BS in Pharmacy from the University of Kansas in 1966. He first worked as a Pharmacist at Coberly Drug in Hutchinson Kansas. He moved back to Herington in 1968, this time as a pharmacist for “Red”.  In July 1970, he purchased the pharmacy and continued to operate Boelling Pharmacy at 7 North Broadway until April 1981 when he moved and expanded it into the former Duckwall’s store at the corner of Main and Broadway. In 2014 he sold the Pharmacy. He retired in 2019 after a 53-year career as a pharmacist.

During his years as a pharmacy owner, he returned Edwards’s favor by providing many, many Herington students their first job as a soda-jerk at one of the few remaining soda fountains in Kansas.  Many other area folks can attest to his kindness and personal attention when he would make after-hours trips to the store to fill/deliver prescriptions to those in need.  He also had a “flexible” extended payment plan when prescription costs sometimes exceeded folks’ budgets. He was a compassionate, behind-the-scenes helper who did many things in the background to help Herington area residents.

Throughout his life he continued his love of sports by watching and sometimes coaching local sports. Many hours were spent in the pharmacy listening to games on the radio. His KU affiliation brought him great joy as a hard-core Kansas Jayhawk fan, Crimson and Blue through and through. Although he was known on occasion to reluctantly root for the team from Manhattan. In fact, after losing a game wager, he reportedly drove around Herington with a large purple sign in the back of his truck. Over his career, he endured several other purple events, but they were all to show his sport and willingness to poke fun at himself. Besides enjoying professional and college sports, when he could get away from the pharmacy, he supported and attended many local games to watch family and friends compete.  He so loved watching his children and grandchildren perform in sports or music that he seldom missed an event and was known to drive four hours one way just so he could watch in person.

Roger was a lifetime Herington advocate.  He always supported ALL of Herington. Over his years he served (often several times) on the Herington Hospital Board, Tri-County Chamber of Commerce, Herington Lions Club, Herington Library Board, Herington Recreation Commission and several Herington United Methodist Church boards and committees. He actively participated in the planning committee for the successful 1987 Herington Centennial. Most local groups and clubs knew he could always be counted on to donate time and money to support their efforts.

Roger served in the U.S. Army Reserves. He entered service in Fort Polk, LA on June 25, 1966. He was discharged as a Captain in Hutchinson, KS on June 24, 1972, after six years of reserve service as a pharmacist. He received a sharpshooter medal.

There was another side of Roger. Besides all the public and community support he gave, he gave more to his faith and family.  Faith, Family, and Fun were Roger’s priorities in life.   His five most memorable moments of his life were 1) His infant baptism, 2) his confirmation, 3) graduating college, 4) adopting their two daughters and 5) having grandchildren.  His proudest accomplishment was helping raise two daughters and having the opportunity to be a loving grandparent. His message to his remaining family is “I have loved being a spouse, a dad and a grandparent. Enjoy as many of these moments as you can. They go by way too fast. I am thankful for the life I have had as I look around and see so many others with many more problems than I have experienced. I am so thankful for our adoption of two beautiful and talented daughters.”

Roger strove to be a good example for others to follow, a person who tried to find the good in everyone and as someone who loved music. His goal at work was to be fair with people. His favorite part of his career was working with and talking with people and his customers. Throughout his life he did so much for so many in the Herington area. His friendship, compassion, love, and humor will be missed by all who knew him.

A public remembrance gathering will be held Saturday, June 12, 2021 from 9:30-11:00AM with a celebration of life service immediately following at 11:00 AM at the Herington Community Building, Herington KS. The family asks that you wear casual collegiate attire, preferably colored Crimson and Blue. A private inurnment will be held later.

“His master said to him, ‘Well done, good and faithful servant. You have been faithful over a little; I will set you over much. Enter into the joy of your master.’  Matthew 25:21 ESV.

To order memorial trees or send flowers to the family in memory of Roger Glenn Boelling, please visit our flower store.