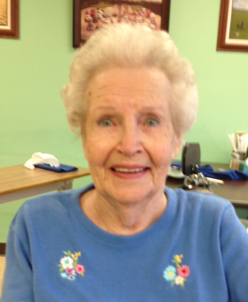 Ruth’s life began on October 28, 1924, on Magazine Mountain at her parents’ home near Paris, Arkansas.  She was the daughter of George M. and Sarah “Sally” (Wisdom) Swilling.  When she was about five years old, the family moved to Blackburn, Oklahoma, by way of a covered wagon.  There she attended school and met her future husband Harold Blackburn.  They were married in January of 1941.  To this union, three children were born.  They lived in the Kansas City area before moving to Davenport, OK.  Ruth moved to Raymond, Kansas in 1943 after Harold joined the Army.  Ruth lived with her in-laws, Thomas Jefferson and wife Willie Mae Blackburn until Harold returned in October of 1945 from serving in Europe in WWII.  They lived in Raymond until 1953 with their three children before moving to Ellinwood, KS.  Ruth lost her husband Harold in a truck wreck in July of 1955.  Ruth was a good cook and loved to fish.  She owned the fishing lure company Tyna Mites in the 1950s and traveled all over the United States to demonstrate the lures. She was known for winning quite a few fishing tournaments around the country.  Her love of fishing is why Ruth moved to Canton Lake in Oklahoma and there she married Leo Cotham in June of 1990.  When he became ill, they moved to Norman, OK until he passed away in June of 1995.  Ruth moved to Marion, KS in April of 1997 and remained in Marion for 11 years before moving back to Norman in 2008.  She moved back to Marion in August of 2016 when her health declined to be close to her daughter.  She is survived by her children Geraldine Box of Norman, OK, Ruth C. (Ronald) Herbel of Marion, and Harold (Ruby) Blackburn of Sallisaw, OK; grandchildren Angela Hearrell, Loretta Wilson, Darlene Ponstein, Pamela Harris, Bradley (Sue) Herbel, Darryl (Angie) Herbel, Kristy Herbel, Johnny Blackburn, Marnie ( Charles) Clayton and Jeff Blackburn; numerous great-grandchildren, great-great-grandchildren, nieces, and nephews.  Ruth passed away on May 9, 2020, at St. Luke’s Hospital in Marion.  She is preceded in death by her parents, husband Harold Blackburn and Leo Cotham, three brothers George M. “Jack”, James T and Kenneth Swilling, and two sisters Lella Cotham and Johnny Thelma Carte.  Graveside memorial services will be held June 13, 2020, 1:00 PM at Hilltop Cemetery in Raymond, KS.  Yazel-Megli Funeral Home is serving the family.  Memorial contributions in Ruth’s name may be directed to Good Shepherd Hospice in care of the funeral home.   Please sign her online guestbook and leave a memory of Ruth at www.ymzfh.com.

To order memorial trees or send flowers to the family in memory of Ruth Cornelia Cotham, please visit our flower store.