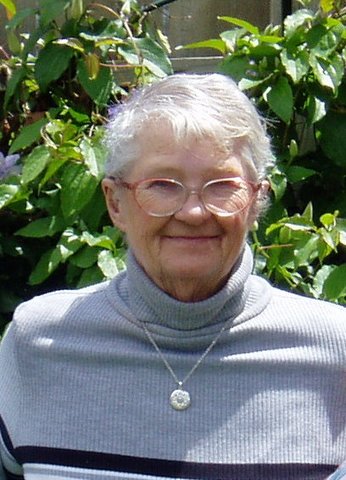 Ruth Lemoine Heim was born in Marion, Kansas on December 3, 1931 to Harry H. and Mabel I. (Scharenberg) Byram.  Ruth’s parents and brother, Harold   attended church at Marion Evangelical United Brethren Church. Ruth enjoyed high school participating in choir, playing trombone in band and Pep Club. Ruth married Veryl R. Heim after graduating from Marion High School in 1949.  Ruth and Veryl had four sons and lived most of their years in Kansas, Colorado and California.  Veryl preceded her death in August 1978.

In 1969, Ruth attended Denver Community College to begin her studies in social services. At age 43, Ruth was determined to complete her college degree and received a B.A. in Sociology at McPherson College in McPherson, Kansas in May 1974.  Ruth started her professional career as an Alcoholism Counselor at the Emporia Mental Health Center in Emporia, Kansas. Ruth’s mental health services career ranged from Substance Abuse Counselor to Crisis Management positions in Kansas, SW Colorado and Nome, Alaska. She worked at Menninger’s Clinic in Topeka, Kansas while attending Masters courses at Kansas University.

In February 1993, Ruth’s love of nature, camping and her adventuresome spirit allured her to Pine Meadows Estates in Pine Hill, New Mexico, where she purchased 15 primitive acres without water or electricity.  After several years, Ruth acquired an FHA grant to have a water well dug and electricity to her Streamline camper. Ruth lived off and on the land for twenty-five years.

Ruth’s passion for counseling extended to over 100 people and A.A. groups who came to her “R and R” for Respite and Retreat. People would bring their campers or stay in camping tents she had set-up for them to stay from one night to several weeks. Ruth encouraged her visitors to enjoy “Only Quiet Here”, claiming Mark 6:31 “Come away to a deserted place all by yourselves and rest a while.” Ruth sold her precious “R and R” land to her son, Danny Heim.

With age, Ruth’s found life difficult to live and maintain her land, so she moved her Airstream camper to Grants, N.M. in 2008. At age 85, Ruth renewed her faith in Jesus Christ and was baptized at the Faith Baptist Church. In December 2016, Ruth moved into Casa Del Malpais senior apartments. Later that year, she required health care and was admitted to Good Samaritan Society care home. Although, Ruth endured some of life’s most difficult hardships, she always maintained a positive outlook by living “one day at a time” and would say “If there’s a will, there’s a way”. Ruth trusted God to sustained her through the trials of life.

Ruth departed from this life to her Heavenly home on December 28, 2020.  She was preceded in death by her husband, Veryl Heim, parents, Harry and Mabel Byram, sister-in-law, Georgine Byram, grandsons, Steven and David Heim and great-grandchildren, Kayla and Phillip.

The family wishes to express our deepest gratitude to the staff and caregivers who provided Ruth with compassionate care and services at Good Samaritan Society home in Grants, New Mexico.

To order memorial trees or send flowers to the family in memory of Ruth L Heim, please visit our flower store.