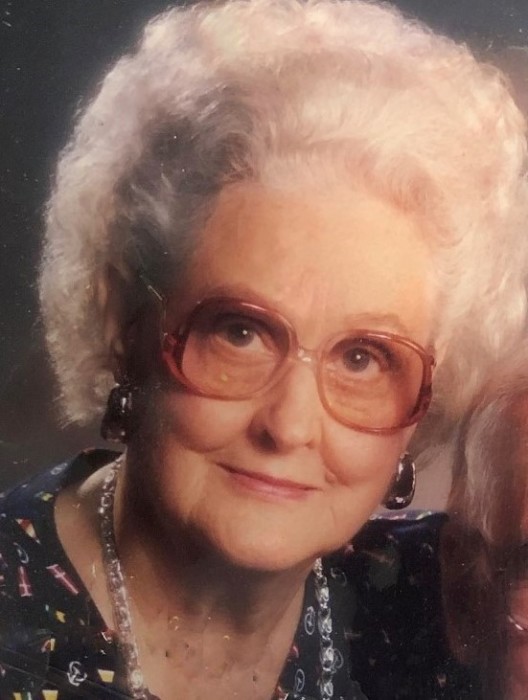 Sarajane Graham Bodecker, age 100, a long-time resident of Benton, KS, passed away March 20, 2019, at Asbury Park in Newton. Service will be Friday, March 29th at 11:00 am at Palmyra Baptist Church, rural Benton, Kansas. Visitation with family will be Thursday, March 28th, from 6 pm to 8 pm at Lamb Mortuary in Whitewater, Kansas.

Sarajane was born on November 11, 1918 (Armistice Day) to Finley and Josephine (Wiggins) Graham near Baldwin City, Kansas.  Her parents were farmers and ran a small dairy.  She lived through the Great Depression and always remembered how hard times were then.  Her forebearers gave land and helped found Baker University, while her great-uncle, Dr. A.T. Still was the founder of Osteopathy.

She attended Baker University and graduated from the University of Kansas.  While at KU, she enjoyed cheering on the Jayhawks as they were being coached by Phog Allen. After graduation, she taught in Melbourne, Kansas for one year, then came to Whitewater to teach Math.  While in Whitewater, she met her future husband, Blaine.  After two years in Whitewater, she moved to Omaha, Nebraska to work for the airlines and then to Kansas City to work for an insurance company before she and Blaine married on May 25, 1946.  She then became a farm wife and homemaker. Sarajane and Blaine were married almost 61 years when he passed away on May 10, 2007. When they are first married, Sarajane had to learn to cook quickly for numerous hungry farm hands.  Although she joked that she hardly knew how to boil water, she soon became a wonderful cook.

She was a proud Democrat and throughout her life saw in person Presidents Franklin Roosevelt and his wife Eleanor, Harry S. Truman, John F. Kennedy, and Jimmy and Rosalyn Carter.

Sarajane was a woman ahead of her time, who was strong and independent.  She was confident, intelligent, and a determined leader. She was always sensitive to the trials and tribulations of those less fortunate. Her resilience, positivity, and sense of humor are a hallmark of her life.

She and her friend Sherilyn Dienst were instrumental in closing down the Furley hazardous waste dump.  The two of them spent many hours researching, analyzing data, writing letters, and giving passionate speeches to convince the state of Kansas to close a dangerous landfill owned by a large international corporation. She also supported other women who filed suit against KU because the university was neglecting their beloved Watkins Scholarship Hall.

Sarajane was preceded in death by her husband, Blaine, her parents, her brother Champ, and her great-grandson Jacob Scott Bodecker.

In lieu of flowers, memorial donations may be given to  Palmyra Baptist Church and Habitat for Humanity.

To order memorial trees or send flowers to the family in memory of Sarajane Graham Bodecker, please visit our flower store.