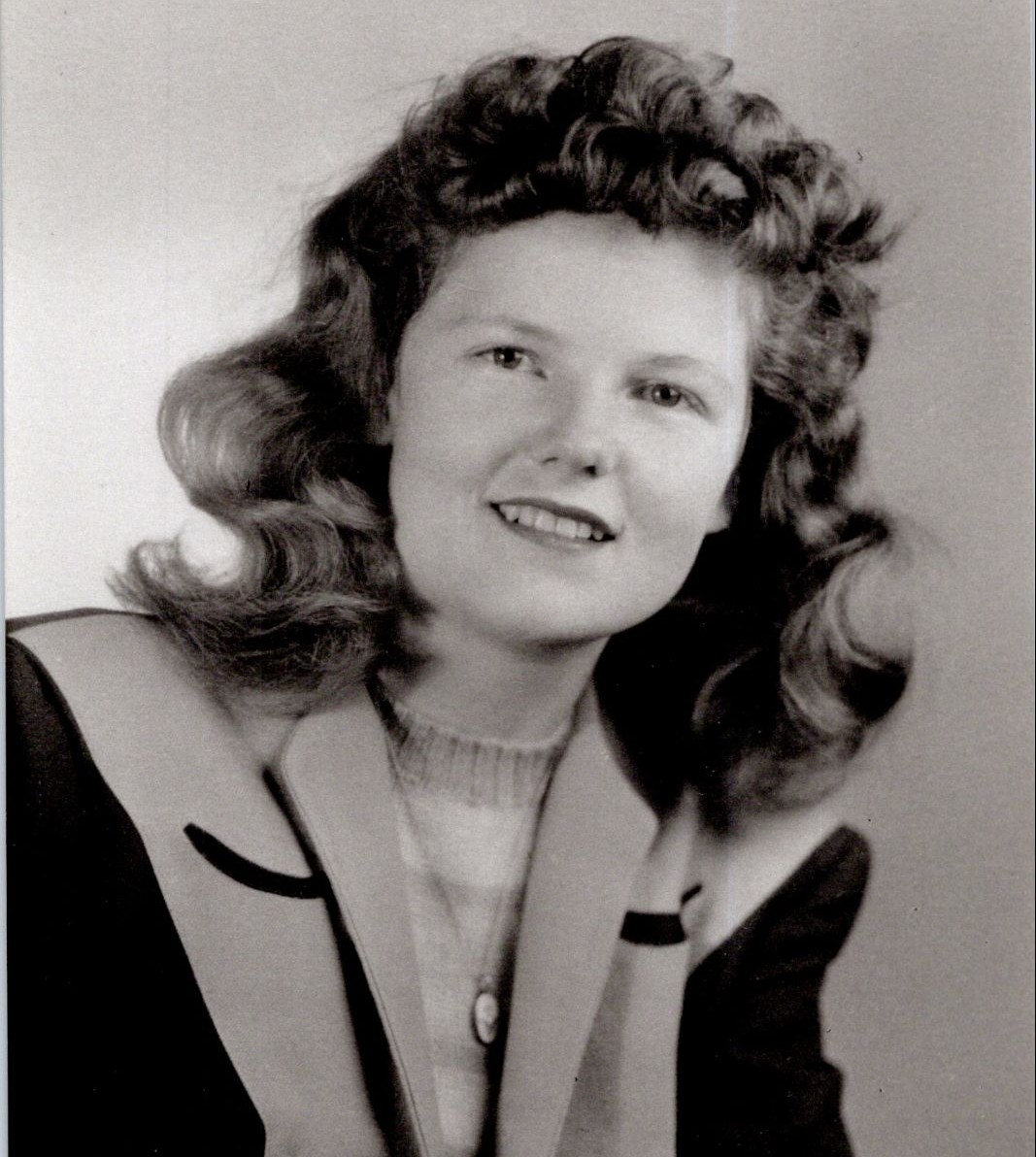 After 94 full years of life, Teresa Mae Tajchman passed away surrounded by her loved ones. She was blessed to receive such Sacraments in her last days to give her family hope that she was quickly welcomed into our Lord and Savior’s kingdom. Her legacy will go on through her 4 children, 18 grandchildren, and 15 (and counting) great-grandchildren. Her house and heart were full to bursting.

Growing up as a self-described “gypsy,” Teresa’s family moved around every few months between California and Kansas. Her family was rich in all that mattered, and Teresa never realized her family was poor until much later in life, looking back at her memories. How fitting her maiden name was “Love.” At 17, she began working at the telephone company, who originally thought her too young but she said “give me a chance,” and they never looked back. She continued to work until marrying the love of her life at the age of 33. She officially met Valerian Tajchman at a dance at the Padella Club in Wichita, KS. Where opposites attract; his dancing skills were unparalleled while Teresa liked to watch. Teresa married who she referred to as “the best man in the world” at the now inactive parish of Our Lady of Guadalupe Church in Wichita, KS. The city girl fell in love with the farm, even without running water and no indoor plumbing. Since 5th grade she had “enjoyed these luxuries.” She always said she felt like she went back in time, but was also never happier.

Although she was no chef before marriage, Teresa taught herself to cook so well she became known for her food and no one went hungry or unsatisfied at her table. She fell in love with gardening, and spent numerous hours canning produce from her garden. Family meals were comprised entirely from their own hands and land. Up until her death she spent time in her garden and over her stove. The two were blessed with twins in 1964 after Teresa went into labor while picking tomatoes in the heat of the Kansas Summer. Even after bringing the babies home, they struggled to name them. They finally decided on “Victoria Lynn and Jacqueline Lee” after the hospital said “these babies need names!” Clay Tajchman was born Spring of 1966, who would grow to be her first call whenever she had a need, want, or question. Scott Tajchman joined the family Winter of 1968, and spent his first six months attached to his mother’s hip at his screeching insistence. After 13 short but joyful years of marriage, Val sadly passed away. Her life drastically changed after he was killed in a farming accident July 4th. Although pressured by many of her family to uproot her children to return to life in the city, Teresa took to heart the advice of her priest. Monsignor Tonne, who Teresa greatly respected, told her not to make any major decisions for one year. A year later, despite her family even appealing to Monsignor to change her mind, Teresa said she was going to stay on the farm. Her family should have known; it would take an extreme act to change the mind of Teresa Tajchman. Monsignor Tonne told her sisters, “We will take care of her and her kids out here,” and he did, along with their neighbors who became family.

Teresa returned to work after losing her husband, now as a cook at the school. A harder-working woman could not be found. She raised her children, lived frugally, and always lived out her faith. Her children never wanted for anything, with Teresa making sacrifices to ensure they could participate in activities, sporting events, and live a carefree childhood. Teresa had numerous nieces and nephews. Her prayers were as fervent for them as if they were own children, which is how she saw them. Her door was open to anyone and everyone, whether for a homecooked meal or a place to live. A homeless migrant or a beloved family member, it did not matter. She loved sitting on her porch, drinking her Pepsi, and chatting with her loved ones, often about what she saw on Fox or EWTN. Her faith led her, living with such devotion to inspire and lead others to a greater faith. She was never without her rosary and held a special fidelity to the divine mercy and prolife ministries. She complained about the stacks of letters she received asking for charity but continued sending whatever she could to all sorts of needs regardless. She was a woman whose faith could not be ignored, denied, or questioned (although it was a dangerous game to ever question any of “Granny’s wisdom” anyway). She died with nothing but had everything.

Teresa passed away on Saturday October 29, 2022, at St. Luke’s Hospital in Marion. She is preceded in death by her parents Charles and Beulah (McNett) Love, husband Valerian Tajchman, siblings Forest Hawkins, Faye Lawson, Winnie Simon, Freda Glover, Bill Love, Ben Love and grandchildren Lindsay and Felicity Jirak. Her family will gather with friends on Wednesday November 2nd from 5-7 p.m. with a Rosary service at 7 p.m. at St. John Nepomucene Catholic Church in Pilsen. Her Mass of Christian burial will be celebrated on Thursday November 3rd at 10 a.m. at the church. She will be laid to rest in Pilsen Cemetery. Yazel Megli Funeral Home is serving the family. Memorial contribution in her name may be directed to EWTN or Kansas for Life. Please sign her online guestbook and leave a memory of Teresa at www.yazelmeglifh.com.

To order memorial trees or send flowers to the family in memory of Teresa M Tajchman, please visit our flower store.