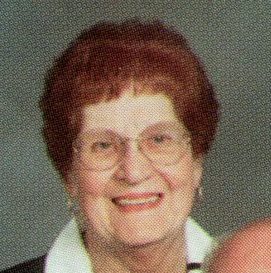 Thelma Jean Cain departed this life on Sunday, February 17, 2019, at the Newton Medical Center. She was the only child of Harry Elmer and Esther Viola (Hauke) Sangwin.  She was born September 5, 1925, at Herington, Kansas.

Thelma attended Herington schools and graduated with the class of 1943.  Her first nursing position was at the Herington Hospital south Broadway location. During World War II she worked for the Cadete Nurses Corps in Kansas City and completed two years of college at the Trinity Lutheran College.  She returned to Herington and was a certified nurse aid and worked at the Herington Hospital on Catalpa and retired from the Herington Hospital located on Helen Street.  She worked at all three locations. Included in her position was training LPN’s and RN’s.  She was a member of Herington United Methodist Church, Esther Chapter #96, Order of the Eastern Star, Esther Club, and American Legion Auxiliary. She liked flowers, light houses, and angels.

She is preceded in death by a son, Clarke Pace in 2018, and her parents.

Family will greet friends at the Zeiner Funeral Home-Herington Chapel, 12:30 -12:50pm, Friday, February 23, 2019.  Funeral service will follow at 1:00pm with Pastor Colleen Teeuwe, officiating.  Graveside service will be at the Sunset Hill Cemetery.

Memorials have been designated to the Herington Hospital Foundation; and may be sent in care of Zeiner Funeral Home-Herington Chapel, 404 S. Broadway, Herington, KS, 67449-3038.

To order memorial trees or send flowers to the family in memory of Thelma Jean Cain, please visit our flower store.