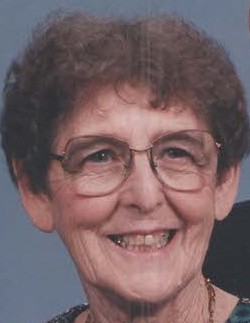 Thelma’s life began on May 23, 1919, the daughter of Charley and Minnie (Nash) Baker in Wichita, Kansas. She attended East Center School, Furley Grade Schools and Whitewater High School. On June 1, 1938, she married Harold G. Eilert in Furley. Thelma was a farm wife, and in the 1940’s she worked for Beech Aircraft as a Rosie the Riveter. She was a school bus driver and custodian at Furley Grade School and also a custodian at Furley United Methodist Church. She retired as an activities director from Wheat State Manor in Whitewater.

Her family will gather with friends on Saturday, June 20, from 10-11:00 a.m. with her funeral following at 11:00, both at Furley United Methodist Church, 11400 E 101st Street N., Valley Center, Kansas 67147. She will be laid to rest in the Green Valley Cemetery in Furley. Due to Covid-19 masks are requested and social distancing will be in place.

Memorial contributions in her name may be directed to Furley United Methodist Church or Heartland Hospice in care of Lamb Funeral Home, PO Box 358, Whitewater, Kansas 67154. Please sign her online guest book and leave a memory of Thelma at www.ymzfh.com

To order memorial trees or send flowers to the family in memory of Thelma Eilert, please visit our flower store.