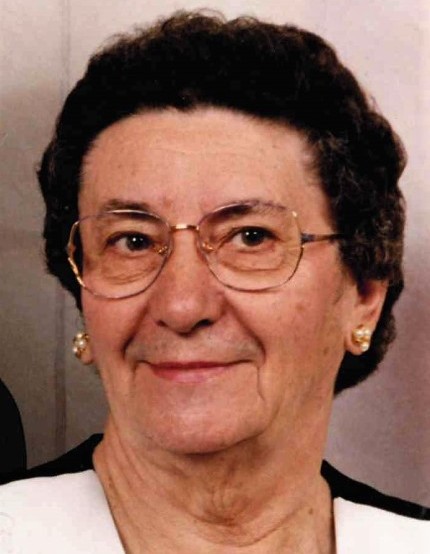 Theresa Klenda of Pilsen, Kansas passed away October 24, 2018, at Salem Home in Hillsboro, Kansas. She was born September 16, 1932, to Valentine & Emma (Schumer) Polok in Hope, Kansas.

She grew up on a farm outside of Hope with her four siblings. After marrying Leonard Klenda on November 8, 1950, they moved to a family farm northwest of Pilsen. There, she continued to enjoy farm life and could be found helping as needed, and could regularly be seen driving the grain truck. She also took delight in raising chickens, gardening, and canning. Leonard and Theresa were members of the polka club and often went to polka dances.

Theresa enjoyed baking and cooked often, and for many. As a member of the St. Anne Altar Society at St. John Nepomucene Catholic Church, she cooked for many weddings and funerals. Cooking was also part of her employment, she worked at E&M Cafe in Durham and Tabor College Cafeteria in Hillsboro, as well as substituting for cooks at Centre Elementary and High Schools.

She was always entertained by her children’s, and later grandchildren’s, activities and could frequently be found at whatever sporting event they were participating in. She was also always up for a game of cards.

Theresa was preceded in death by her parents; her husband, Leonard; children, Isabel, Timothy, and Stephen; brothers Clarence and Vincent; and sister, Margaret.

She is survived by her brother, John, and wife Pauline; her children, Dennis and wife Terry, Val and wife Julie, Vince, Monica and husband Tom Leihy, and Frances and husband Donald Mueller; 28 grandchildren; and 30 great-grandchildren.

A rosary service will be held Sunday, October 28 at 7 pm at St. John Nepomucene Catholic Church in Pilsen, Kansas. The funeral Mass will be held Monday, October 29 at 10 am, also in Pilsen, followed by interment at Pilsen Cemetery. Memorials can be made to the Fr. Kapaun Fund or Salem Home, in care of Zeiner Funeral Home, Marion.

To order memorial trees or send flowers to the family in memory of Theresa Klenda, please visit our flower store.