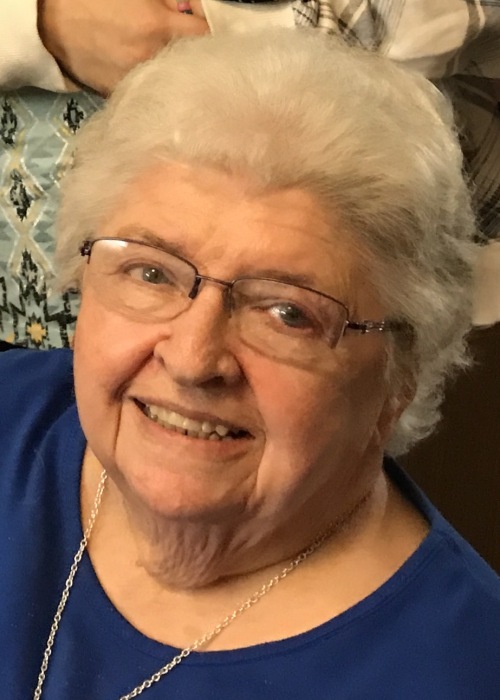 Vera Mae Gehring was born on September 11, 1931, to Dan and Pearl Gehring, on a small farm near Moundridge. She was the oldest of six children. (Five girls and one boy.) Even though her parents were hard working, they were considered to be poor. They lived in a small farm house with two bedrooms, no electricity, no running water and no indoor toilet. The five girls shared two regular sized beds.Vera recalled that they always had a large garden and canned 1,000 jars of fruit, vegetables and meat since they had no refrigeration. Her and her sisters always wore dresses made out of pretty feed bags to school and church. Her mom was a very good seamstress. Vera didn’t have a pair of jeans until her senior year in high school. Of the six children, Mary, the youngest, was the only one born in a hospital. Shortly after being born, the family moved to a farm near Whitewater where her and her siblings attended the Claypool one room country school with grades 1-8. She didn’t know how to speak English when she started school. Vera attended and graduated from Whitewater High School in 1949. Vera wanted to be a nurse or a teacher after high school, but marriage changed her direction.

She met Melvin Tilson at a friend’s wedding. She was a bridesmaid and he was the best man. After a short courtship they were married at Emmaus Church on September 22, 1949. They moved to Arkansas City and lived there for five years. Vera’s first job was working in a meat packing plant in Arkansas City. She always told us that if we ever saw how they made hot dogs we would never eat another one. While living in Arkansas City Vera and Melvin began their family with the birth of Terry in 1951, Judy in 1952 and Jerry in 1953. Vera and Melvin spent most of their married life in Whitewater where they owned and operated a small restaurant called the M & V Café. After a number of years serving as a cook and waitress, Vera took a job as a school secretary in the Remington school district. She was at the grade school and then moved to the high school when Jerry started high school. She told Jerry she made the move to “keep an eye on him.” She said that of all the jobs she had, working at Remington was her favorite job. Following her time at Remington, Vera applied for the postal service and eventually became the Postmaster of Elbing until she retired in 1998.

Even though Vera was busy helping Melvin, she always found time to support the kids and grandkids in their involvement in various activities, she was also very supportive and helpful to the extended family through the years.

Melvin died after 43 years of marriage in 1992 and Vera married Jack Sprague in 1997 and they were married for 15 years before he died in 2012. Those who preceded her in death are her parents, Dan and Pearl Gehring; her husband, Melvin Tilson; her sister, Helen Rose; her husband, Jack Sprague and all of her brothers-in-law.

Private family services will be held. She will be interred next to Melvin in Swiss Cemetery. Please sign her online guest book and leave a memory of Vera at www.ymzfh.com

To order memorial trees or send flowers to the family in memory of Vera Mae Tilson-Sprague, please visit our flower store.