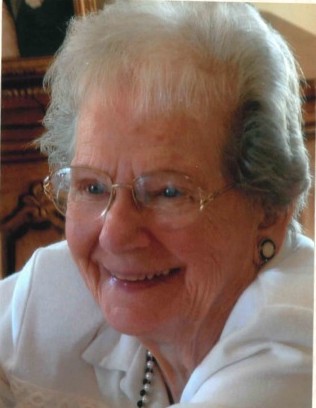 Whitewater -  Verbena E. Claassen passed away January 23, 2018, at Wheatstate Manor. Verbena was born May 30, 1922, to Jacob T and Eva (Unruh) Wedel at Goltry Oklahoma. She is one of 8 children. She attended grade school and high school in Goltry. She attended Oklahoma Bible Academy (OBA) in Meno. This is where she met her future husband Donald (Don) Claassen. At OBA she was part of the ladies’ trio and other ensembles. Don was part of the men’s quartet and both groups traveled together to various places in Oklahoma and southern Kansas.

She and dad were married June 7, 1943, at Whitewater, Kansas. To this union 2 daughters were born, Donna Jane and Janell Diane. They started their life together on a farm near Potwin, Kansas where Don helped Ed Chase as a cowboy. When Donna was 6 months old, they moved to a farm near Whitewater where they remained for many years. Mo helped in the fields and her at the Potwin meat locker and later at the Whitewater meat locker. She was very active in her church teaching Sunday school for many years, even teaching the children of some of her first students. She also helped with AWANA, the Missionary Circle, sang in the choir. After moving off the farm, they rented a house in Whitewater intending to stay only 6-12 months. The landlord, Ron Harder (a good friend of theirs,) said they could stay there as long as they liked – little did he know it would be 10 years. They then moved to the Sunflower Apartments in Whitewater where she resided until her death.

She started Crocheting many items, selling them at various craft venues such as Berean Academy. She was known for her many angels and doilies many doilies were given to nieces and nephews as wedding gifts. After dad passed away in April 2006, she started crocheting sweaters that were sent to 3rd World War countries. She never bought a single skein of yarn for these sweaters – it was all donated to her by family and friends. By the time she had crocheted the 305th sweater, she was averaging 3.5 sweaters a month! When she was running low on yarn, she would pray to her Lord asking for a sign that she should stop but more yarn would appear. She crocheted 430 Sweaters and over 100 Caps by January 2018.  She Slowed down crocheting the sweaters due to her failing eyesight and added baby caps for the same organization using remnants of the yarn left over from the sweaters.

She was an active church attendee and an avid prayer warrior, upholding her family in prayer every day and other relatives and friends as well.

To order memorial trees or send flowers to the family in memory of Verbena E. Claassen, please visit our flower store.