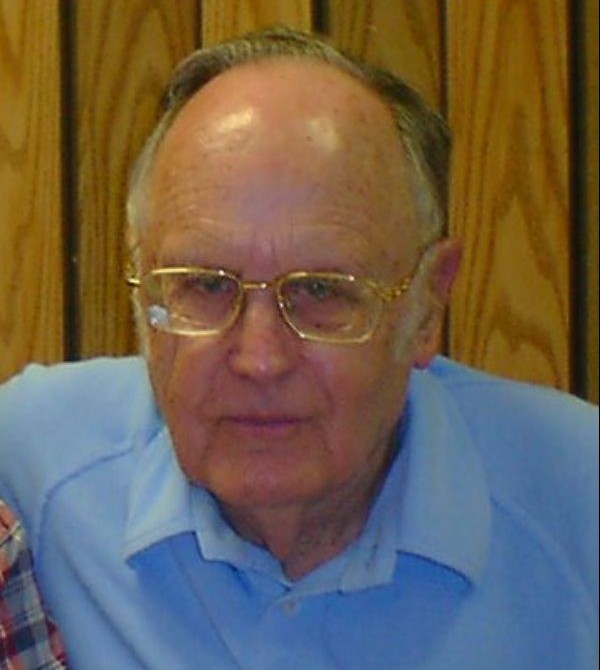 Elmo’s life began on August 29. 1928 in rural Tryon, OK. He was the son of Floyd and Marjorie (Hutchinson) Murray. Elmo was educated in Tryon and later went to telegraph school. He served his country in the United States Army during the Korean War. Elmo worked as Station Agent for the Rock Island Railroad from October of 1946 to April of 1980. He also worked for the Elbing Grain Company from April of 1980 until his passing. Elmo was united in marriage to Dejah Roof on June 1, 1947, in Tryon. He was baptized in 1940 at the Valley Queen Baptist Church and later became active in Zion Mennonite Church in Elbing. He served as a deacon, secretary of the church board, Sunday school teacher and on the kitchen committee at Zion. Elmo served the Elbing community as the city clerk for 37 years and served on the grade school PTA. He enjoyed spending time with his family and his work. Elmo kept himself fit by exercising at the Newton Wellness Center. He was an avid local history buff, enjoyed keeping his mind sharp with crossword puzzles and reading the newspaper until his eyesight dimmed. Elmo enjoyed Facebook and had written, and self-published four local history books. He was thankful for his relationship with Christ and his felt God’s protection over himself daily. His loving family includes his daughters Debra Robinson of Newton and Pamela (Carl) Williams of Elbing; grandchildren Dawn Michelle Chappuis, Nathan Robinson, Dana Robinson, Benjamin Williams, Samuel Williams, Isaac Williams, Moses Williams, and Levi Williams; great grandchildren Ethan, Eli, Jessica, Kimberly, Jordan, Destiny, Libertee, Harley, and Camryn; great great grandchildren Ryker, Aryzza and Emmitt; and his brother Gene (Christine) Murray of Perkins, OK.  Elmo passed away on Wednesday July 6. 2022 at the Newton Medical Center. He is preceded in death by his parents and wife Dejah. His family will gather with friends on Friday July 15th from 5-7 p.m. at Lamb Funeral Home, Whitewater. His funeral service will be held on Saturday July 16th at 10 a.m. at the Zion Mennonite Church in Elbing. He will be laid to rest in the Zion Cemetery, Elbing. Memorial contributions in his name may be directed to Zion Mennonite Church. Live streaming available at twitch.tv/zionmennonite.  Please sign his online guestbook and leave a memory of Elmo at www.yazelmeglifh.com.

To order memorial trees or send flowers to the family in memory of Vernon "Elmo" Murray, please visit our flower store.