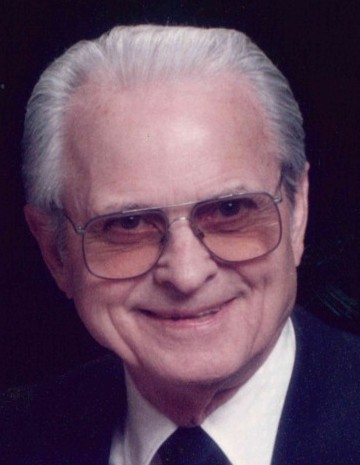 Vernon Elvis Hopkins was born on May 11th, 1919 at home in rural Benton, and went to his heavenly home on April 3rd, 2017 at Wheat State Manor, surrounded by his family.  Vernon was the second son of David L and Anna (Wiens) Hopkins, and had two brothers and two sisters.  He graduated from Whitewater High School.  Vernon was united in marriage to Doris Bodecker on May 10th, 1941 and that union was blessed with four children.  He was a member of the Army during World War II serving four years and discharged with the rank of Second Lieutenant.  He did his basic training at Ft Benning, Georgia, the same base where his first grandson later trained.  During his service he and Doris lived in Texas, Oregon, and Maryland.

After discharging out of the service he returned home and began farming northwest of Benton.  His family was raised on the farm where Dean and Mary now live.  In 1969 he retired from farming and moved to Benton where he began his career in insurance and real estate.  After retiring from the insurance business he became a real estate appraiser and continued in real estate sales, eventually retiring at the age of 85.

Vernon enjoyed spending time with his family and his wife of 75 + years, and was a lifelong member of Palmyra Baptist Church, where he also served as deacon for many years.   He was a member of the board of directors of Wheat State Manor, also belonging to the Whitewater American Legion, Benton Lions Club, and Gideons International.   Vernon and Doris loved attending monthly pitch parties with their friends and bowled in a Saturday night league in Wichita.

He was an honorable Christian man, loving and kind, and a great dad to his children and a wonderful grandpa!  He will be missed greatly but lived an outstanding life and leaves a wonderful legacy. Left to mourn is his wife Doris of Wheat State, sons Frank (Marty) of Pratt, Fred (Shelley) of Benton, Dean (Mary) of rural Furley and daughter Janet (David) Sager of Moran,  9 grandchildren and 20 great grandchildren with another great grandson due in June. He was preceded in death by his parents, brother Loren and Lester, and sisters Dorothy and Betty.

Memorials may be given to Kid and Calf Ministries, the ministry of son Dean and operated on the farm where Vernon’s family was raised.   Memorials may be sent c/o Lamb Funeral Home, P.O. Box 358, Whitewater, Kansas 67154.

To order memorial trees or send flowers to the family in memory of Vernon E. Hopkins, please visit our flower store.