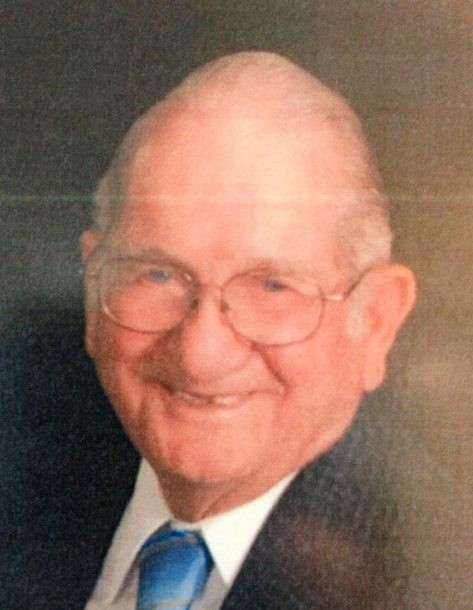 Bill Granzow, age 92, of Herington, entered his heavenly home on August 10, 2019, at the Wesley Medical Center of Wichita. He was born on May 3, 1927, on the family farm in Morris county (Highway 4) between Latimer and White City.  He was the son of Louis Herman and Grace M. (Smalley) Granzow.  He had one brother, Donald, and a sister, Helen.

Bill married Delores Yvette Schneider on September 20, 1948, at the United Methodist Church in Herington.  In their early years of marriage they enjoyed square dancing with the Herington Squares.  Throughout the years they would play cards regularly with the neighbors. They were the parents of four sons; Steven, Dennis, Thomas, and Rick.  The family was active in the United Methodist Church.  Bill served on the Administrative Board as chairman and other church committees and was known to dry dishes at the mother daughter banquet.  Bill and Delores were supportive of their son’s activities and grandchildren’s events.

His lifelong enjoyment was being a farmer/stockman.  He participated in the American Agriculture Movement by riding with the tractors to Washington D.C.  He rode with another farmer on his tractor.  The entire trip was during severe winter conditions and the farmers would stop and  dig out other  immobilized vehicles throughout the trip.   He had a pilot’s license and went flying for many years.  He was a member of the Carey R. McClaren Post #12, American Legion of Herington.  Last year he received his seventy year pin.  He served in the U. S. Navy, from May 3, 1945 (his birthday) through July 16, 1946.  He was awarded the victory medal during the Asiatic Pacific Theater.  He graduated from Herington High School by certificate in March 1945.

Preceded in death by sister, Helen Schump, brother, Donald Granzow, and his parents

The funeral will be held at the St. Paul Lutheran Church of Herington, on Thursday, August 15, 2019, at 10:30am with Pastor Colleen Teeuwe, officiating.  Military committal will follow at Sunset Hill Cemetery.  Family will receive friends at the funeral home Wednesday, August 14, 2019, from 6:00-8:00pm.  Memorial gifts may be given to St. Paul Lutheran Church or Hilltop Activity Fund:  in care of YMZ Funeral Home, 404 S Broadway, Herington, KS 67449.

To order memorial trees or send flowers to the family in memory of W. D. (Bill) Granzow, please visit our flower store.