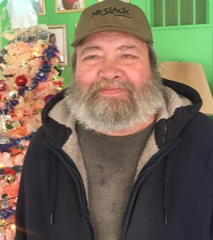 Bill's life began on May 10, 1960 in Pampa, Texas.  He was the son of Robert and Linda (Baggerman) Alkire.  Bill was a 1979 graduate of Ulysses High School.  He drove truck for oil field supply companies and worked as a laborer before he became disabled.  Bill loved to tinker with cars and rebuilt many engines in his spare time. He is survived by his mother Linda Alkire of Marion, siblings Sheila Thouvenell of Marion, Elizabeth Alkire of Marion, and Kenny Alkire of Stillwater OK, a daughter Brandy Birkett of Louisiana and grandson Immanuel and several nieces and nephews.  Bill passed away on October 1, 2020 at Hillsboro Community Hospital.  He is preceded in death by his father Robert.  His family will gather with friends on Tuesday from 1-3 p.m. at Yazel-Megli Funeral Home, Marion where his funeral service will be held at 3 p.m. led by Pastor Carl Helm.  Memorial contributions in Bill's name may be directed to the funeral home.  Please sign his online guestbook and leave a memory of Bill at www.ymzfh.com.

To order memorial trees or send flowers to the family in memory of William Dean Alkire, please visit our flower store.