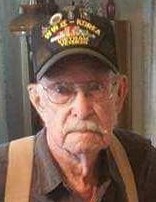 Mr. Cain was a retired Army Staff Sergeant.  Served in the Navy for 4 years during World War II in the Pacific Theater of Action as a Gunners Mate; then enlisted in the Army for 22 years, served in Korea then in Vietnam as a combat medic.  He was a member of the American Legion Post #12, and a Past Master of Kansas Lodge #307, AF & AM of Herington.

He married Thelma Jean Sangwin on May 4, 1964, in the Methodist Church, Herington, she preceded in death on February 17, 2019; his 4 brothers: Joseph Cain, Jr, Elton Cain, Hardy Cain, and Gary Cain; and a son Clarke Pace in December 2018.

Memorials to the Herington Hospital Foundation; and may be sent  in care of the Zeiner Funeral Home, Herington Chapel, 404 S Broadway, Herington, KS,  67449-3038.

To order memorial trees or send flowers to the family in memory of Willis "Bill" R. Cain, please visit our flower store.