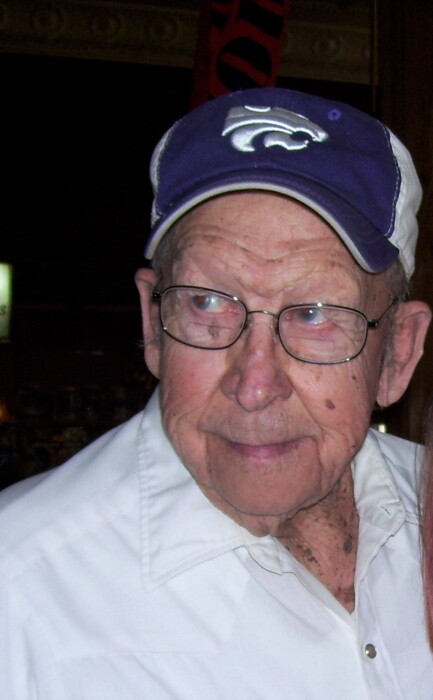 Wolter liked to tell people he was a 1927 Model.  He joined his parents, Edythe Wolter Floyd and Whitfield Floyd, in this life, on a farm southwest of Herington on July 2.  In 1936 the family moved to farm southeast of Herington where Wolter spent the rest of his life.  Throughout his youth and into his adulthood he worked with his parents on the farm and in the dairy. Wolter joined the Army in 1946 after his graduation from Herington High School.  He served in the Occupational Forces in Japan.  While away from home, his mother suggested to my mom’s mother, Helen Herpich, that maybe Doris would like to correspond with Wolter to help ease his loneliness.  We all know how that ended! When he finished his service in the Army, Wolter attended and graduated from Kansas State University, while courting Doris. All his life he was a proud Wildcat and loved following the Wildcat teams.  You couldn’t call Wolter a fair-weather fan!  When the Wildcat football team was having its worst seasons, he’d load the family in the car to go watch a Saturday afternoon football game in KSU stadium.  During basketball season, after leaving the milking barn in the evening, he’d often take the family, along with Truman Lockard, to Ahearn Field House to watch basketball.  Of course, Wolter was as thrilled as any Wildcat when the football team finally got the hang of winning.  He and my mom went to many tail gates and games with Lee and Diana, their grandchildren, and the rest of the Wildcat Nation.  Wolter joined his father, Whit, in the dairy and farm operations after he graduated from K-State in the early 1950’s.  With his dad, he took great pride in managing their herd of registered Holsteins.  He joined Doris in marriage, built a new house for her on the farm, and together they raised three children, Gary, Susan and Lee. Wolter was always involved in his family’s activities.  He and Doris were faithful members of the First Christian Church all their lives.  Wolter served as a deacon and elder for his congregation.  He was a faithful member of the Christian Church for over 90 years.  They were supporters of 4-H.  Wolter served as a Community Leader for the Lyon Prospectors 4-H Club while his children were members.  He was the President of the Tri-County Fair Board for several years and served as the Dairy Superintendent at the Tri-County and Central Kansas Free Fairs.  When his kids were showing their Holstein cows, he and Doris were at the show ring.  As a dairyman, for many years he served as a board member of the Mid-America Dairy Producers. He supported his community as an active member of the Red Cap Club, Kiwanis, and Lions.  Wolter and Doris loved to join the other members of the Herington Squares to square dance.  They also belonged to bridge clubs and pitch clubs through the years.  When Wolter decided to sell his dairy herd in the late 1980’s, he and Doris became “snowbirds” and spent their winters in Brownsville, TX.  Their friends from Herington, John and Perla McGrew, were often their partners in crime as they square danced, played bridge and traveled.  They made many new friends too during those winters in Texas and had lots of adventures until Doris insisted every spring they come home for Easter with their family.  Wolter and Doris spent many hours as babysitters through the years with their grandchildren.  Often the kids stayed the night, or a few days, depending on the plans of their parents.  As grandparents the door was always open, and Wolter and Doris took great joy in sharing their grandkids lives. Grandpa was always ready to have a bowl of ice cream with Hershey’s Syrup. It was great fun for them all to play games together.  When the grandkids were playing sports or showing cows at the fair, they were always there cheering them on. The grandkids all treasure the times with their Grandpa and Grandma.  In his final years, Wolter lived at the Legacy of Herington.  He was always eager to get in the Bingo, or Pitch or Mexican Train Dominos games.   When Wolter attended the church services at Legacy, often when the others stopped singing after the first verse, Wolter continued on with the next verse.  He knew his hymns!  He touched the lives of the caregivers at Legacy with his gentle ways and his smiles.  He lived his life well and in doing so, showed his children, grandchildren, and others how to be decent human beings and how to live a life of service, integrity, and joy.  While his passing saddens all our hearts and leaves an empty place in our lives, we rejoice that he now dwells in Heaven with his Savior, and God, and his loved ones who have gone on before.  We know when he arrived, he was welcomed as a good and faithful servant. Wolter was preceded in death by his wife, Doris Herpich Floyd, his infant son, Robert Craig Floyd and his parents, Whitfield and Edythe Floyd.He is survived by his children: Gary Floyd (Cindy), Susan Lehr, and Lee Floyd (Diana); his grandchildren: G.P. Floyd (Amber), Danny Floyd, Shannon Lehr, Jessica Lehr, LeAnn White (Jeff), Curtis Floyd (Kristen), and Ryan Floyd; his great-grandchildren: Amanda Patterson (Michael), Montana Floyd, Brandley, Wesley, and Mathew Floyd, Liam Floyd, Maddie and Elle White, Karley, Kali, Keely, and Kennedy Floyd, and Armond McGary; his great great-grandchild: Sadie Patterson.  His family will gather with friends on Friday from 10-11 a.m. on Friday at the First Christian Church in Herington where his funeral service will be held at 11 a.m.   He will be laid to rest in Sunset Hills Cemetery.  Yazel-Megli Funeral Homes, Herington is serving the family.  Please sign his online guestbook and leave a memory of Wolter at www.ymzfh.com.

To order memorial trees or send flowers to the family in memory of Wolter E. Floyd, please visit our flower store.